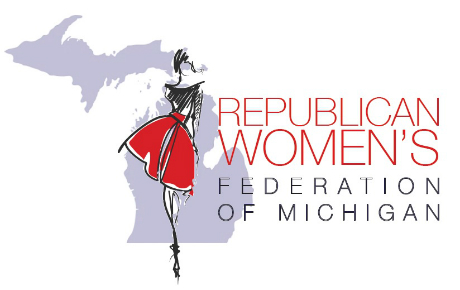 About the RWFM – The first Michigan Women's Republican Club was formed in Detroit in 1918 - in the spring before Michigan men gave women the right to vote. The Republican Women's Federation of Michigan (RWFM) was founded in 1925, thirteen years before the National Federation of Women was organized in 1938. Michigan, the Birthplace of the Republican Party "Under the Oaks" has one of the oldest Women's federations in the Nation. In 2015, the RWFM celebrated 90 years of conservative women in politics.

Details
Amount
Payment
By clicking "Contribute", I affirm that:

Federal election law requires political committees to use best efforts to report the name, mailing address, occupation, and name of employer of individuals whose contributions exceed $200 during an election cycle. An individual may not contribute more than a total of $2,800 per election to the committee. Federal law prohibits contributions to the committee from the general treasury funds of a corporation, labor organizations or national banks (including corporate or other business entity credit cards), from any person contributing another's funds, from a Federal government contractor, or from a foreign national who lacks permanent resident status. Contributions are not deductible for Federal income tax purposes.

Contributions are not tax deductible